Well, I hope everyone has had a great Solstice, and will continue having a wonderful holiday season with Christmas in a couple days.  Up here in NY it’s been pretty rainy and a little on the warm side, with little snow.  Hopefully we’ll have some for the 25th, as that would be fairly appropriate.  And hopefully when the inevitable lake effect comes we’ll all be safe.  If you’re reading this from somewhere out in the western US where they seem to be getting our winter weather, I wish you the best.

Anyway, as you may have seen me post here in the past, I’ve had some interesting issues with my Lenovo G530 laptop.  First, the screen became wobbly and shaky.  Then, it started to flicker.  The first of these was easy to fix, the second very annoying, and almost as easy to fix.  Well, I write now because the dreaded LCD flickering has returned.  Now, it’s been a while since I posted about it last, but in truth the fix lasted for maybe three weeks.  Figuring the cable had come loose, I repeated it, giving me another couple weeks.  Finally, a couple weeks ago I reseated the video cable only to have reliable operation for maybe a few hours before the flashing came back.  It seemed that the work around involved slapping the display repeatedly in certain locations along the sides, which served to jostle the wiring back into place, as well as relieve some of my frustration.  Then last week, after doing this for a while, I got fed up with this.  Here was the result: 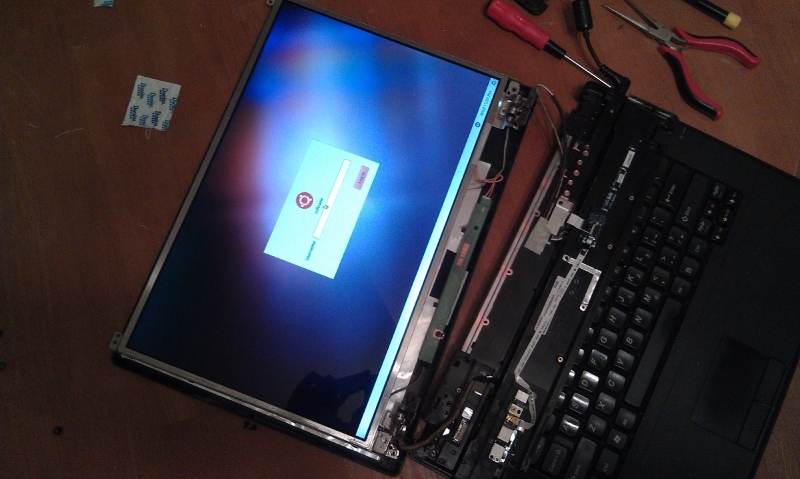 Now, you might think that that was a little bit harsh.  But, I disassembled part of the screen and put it back together again.  I figured that somewhere in there something was in a bad position, and just needed to be tweaked a little.  And, it worked!  Since doing this I’ve had no flickering.  You might be wondering what, specifically was the problem.  Well, I still am too – all I did was take it apart and put it back together again, and it seems fine.

Now, given the popularity of previous posts a nice guide is in order.  However, there are a few things to keep in mind before going through this and attempting it yourself:

Good luck.  This may help you, or it may not, but if the flickering has really been getting to you it’s worth a shot.  Overall, if you’re thinking of buying a G530, I’d recommend against it.  It’s pretty nice for a crappy machine, but it is a crappy machine.  But if you’re stuck with one, at least it’s not impossible to take apart.