Take a look at the picture blow, of a 400 watt inverter I garbage picked a while ago: 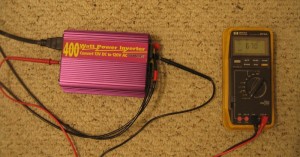 The inverter is running off a 12 volt battery, and is switched on.  Notice anything interesting, particularly with how the meter is connected and what it’s reading?  (You may have to click to embiggen, so you can see the display.)

The meter is connected between the negative (black) battery post, and one of the legs of the 120 volt output, and is reading about 67 volts AC.  This works between that post and either leg of the output, as well.  Going between the two legs gives 117 volts, which is the output we want.

So what’s going on here?  The problem has to do with grounding and isolation.  Inside the inverter, there’s a circuit that looks something like this: 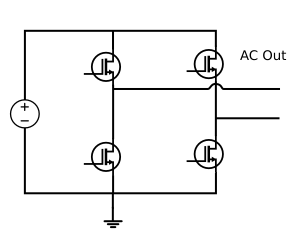 That’s an H-bridge, a switching arrangement that lets you supply a load (on what I have labeled here as the AC out wires) with either normal or reversed polarity, or none at all.  This is very simplified; you’d want to drive the switches (MOSFETs in this case, could be something else like an IGBT) with some sort of switching scheme of some sort.  However, this is the basic mechanism by which the inverter makes alternating current.  (There are other ways to do this, including one with just two switches, but this is the basic idea.)

Notice the ground symbol on the low-side of the H-bridge?  That’s our problem – imagine that the MOSFET just above it (the lower left-hand one) is on, as is the one diagonal from it in the upper-right.  The other two are off.  If we measured between the AC out leg from the left-hand side of the bridge to the ground node, we’d see 0 volts, because it’s the same node – the transistor shorted that leg to ground.  But, milliseconds later (about 8.3 if we’re at the beginning of the cycle) the transistors switch – now, that same leg of the AC out is at the voltage of the DC source (could be battery voltage, or could be from a DC-DC converter), and that’s what we’d read on the meter.  It would be in this state half the time, and with the meter set to AC voltage we’d read something like the 67 volts in the first picture.  The AC output is floating with respect to the ground point.

The problem, then, is if at any point in your AC wiring the ‘neutral’ conductor is tied to ground, and that ground is also tied to Battery-, you have a short-circuit path!  This depends on the design of the inverter as far as whether or not it’s a pure short circuit (the DC source would have some impedance to it, so it might not necessarily be like a dead short on the battery), but it could still damage your inverter.  Not to mention that having a voltage between Battery- and the AC neutral or ground would be a safety hazard.

So, how much of a problem is this, really?  Well, in the picture the inverter is running a laptop charger, which is encased in plastic and I think actually provides isolation between its input and the laptop.   So, here I’m not worried about it.  However, say you wanted to provide some backup power to your house in a power failure.  It’s not uncommon for people with a generator to backfeed their circuit breaker panel (either with into a normal outlet with an aptly-named suicide cable or with a proper receptacle and transfer switch).  So what if we did this with this inverter instead?

In the US homes typically have the neutral and ground bonded together in the circuit breaker panel.  Now, say you have a little system with some solar panels and a big battery to run the inverter, and you happen to have the negative side of the battery grounded on a watter pipe in your basement, or maybe even the ground wire in your house wiring…  Even if you drive in a separate ground rod for the DC side, you’ll wind up with a current path, and a potential safety issue.

Now, a 400 watt inverter is a little small for backing up your whole house, but there are larger, cheapy inverters like this one that probably have a similar design.  If you find a 2000-3000 watt inverter at your local hardware store for a few hundred dollars, this is probably the case.

So, how can this be fixed?  Take a look at this update to the schematic from above: 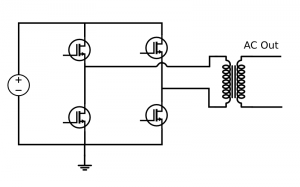 Notice that there’s a transformer on the output of the bridge – now the AC output is isolated from the DC side!  So you can use the same ground on the DC and AC sides.  There isn’t an electrical connection, there’s a magnetic one, so we just transfer the energy across.  There is a small section where the AC is floating, but it can be safely enclosed in the inverter chassis, and insulated appropriately.  Of course, there are other solutions; the DC source could be fully isolated itself, and the low-side of the H-bridge could remain ungrounded.  This way you could still reference the output to the inverter’s DC input safely.

You could also get an isolation transformer and put it between the inverter and your loads.  This would solve the problem, but would give you a little drop in efficiency – it’s not the same as if the transformer is designed into the inverter.  Also, the cheap inverters that don’t isolate input from output tend to be modified sine wave (really modified square wave), and so could cause an off-the-shelf isolation transformer to run with even less efficiency.  (A true sine wave inverter could also have this problem; the difference is in how the switching is done.  But, a lot of high-end sine wave inverters tend to take the isolation problem into account, it seems.)

On another note, those working with renewable energy will tell you that building a solar power system just for the off chance your grid power is out for a few hours a few times a year isn’t very economical.  This is true, but I imagine that there are people out there who will think of attaching a big, cheap inverter to their home’s wiring, which is why I threw this together.  The moral of the story is, if you’re going to distribute the AC from your inverter in a more complex fashion than an extension cord and power strip, check for voltage between each AC leg and the negative DC input.  If you’re looking at buying an inverter, see if you can go to the store and try this with a multimeter.  Or, call the manufacturer, and see what they say about hardwiring it.  If it’s designed to be wired into an electrical system, there’s a good chance they’ve thought of this problem.