Somehow, I had expected to post here a few more times this year, not sure what I was thinking.  But, better late than ever.  Now for something Halloween-related: 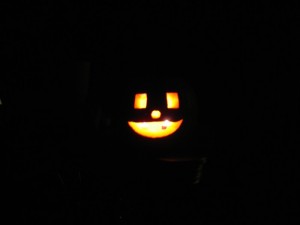 And here’s a picture in the light: 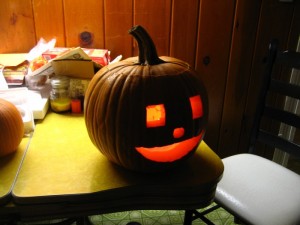 Good-sized pumpkin, and I also made sure to save the seeds: 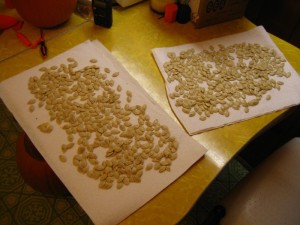 Basically, you pick the seeds out of the pumpkin guts and rinse them out well.  Then you can let them dry for about a week, and save them in an envelope.  I’ve got the ones above from the big pumpkin, as well as some from a smaller one.  I’m not sure I’ll have the space to plan them in the spring, as they do kind of take over, but I’ll see.

Anyways, I mentioned an homebrew inverter project before.  I’m still tossing this around, but I think I’ve thought of a way to simplify part of it.  More information will come, sometime.

In the mean time, Happy Halloween!

I hope you all had a great Halloween!  I didn’t do too much, and didn’t even get too many trick-or-treaters, but I did carve a pumpkin: 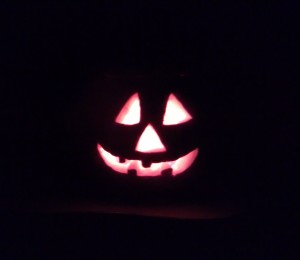 One thing to note for next year, though is to be careful of the tools.  I picked up one of those carving kits.  I would avoid this particular kit in the future, though, as the saw broke: 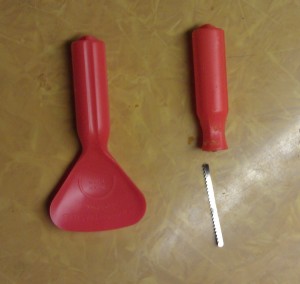 The scoop was very nice, though.

I didn’t use any of the patterns, just made something up.  After the breakage I ended up going out and picking up a steak knife for working on a smaller pumpkin, which was fine.

On a more serious note, if you or a loved one was caught in Hurricane Sandy, I wish you all the best.  I wasn’t really hit beyond some wind and rain, but I know that there is still damage being repaired.  So be careful, and hang in there!

In case I don’t get to post tomorrow, happy Halloween!  I hear AMC has some horror movies on tomorrow.  Maybe you trick-or-treat, or maybe you’ll be handing out candy, maybe you’ll be tossing toilet paper around, whatever.  Remember to stay safe, and don’t light any fires you can’t put out. 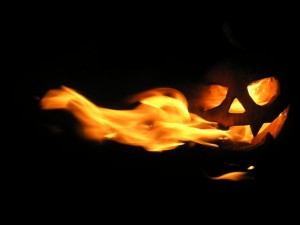 I went home this weekend again.  Here are some pictures:

So yeah, expect a schematic for that flicker circuit whenever I feel like it.  I actually came home for Halloween, and so didn’t need it, but it’s still kind of neat anyway.

Well, on another note, remember to vote tomorrow.  We don’t get many opportunities to take a slice of democracy in this country, but it is our country, and we deserve a say.

Well, the flicker circuit I alluded to earlier is done.  It’s on its own project board, and it does in deed make a light bulb flicker like a candle flame.  Unfortunately, I don’t have a schematic to post at the moment.  I’m not sure if it will make a difference at the moment, especially with Halloween in a few days.  Yes, I’m sure it would be useful for other decorations or whatever, but a pumpkin light is a good application for it.

Well, for those of you a bit more electronically inclined, I’ll explain how it works.  It’s probably not the best way to make a light flicker, but it works for me and is pretty convincing if you mess with it.  First, consider a circuit that dims a 12 volt bulb.  A way this could be done is using a 555 timer to switch a MOSFET on and off really fast – PWM.  So, you change the duty cycle to change the brightness of the bulb (ie, the bulb is dimmer when it is off more than it is on, but it’s still switching on and off so fast you only perceive it as being dim).  I based this part of a circuit off of a light dimmer I found in Home Power Magazine Issue 34 (I think), though you should be able to find something like it online.  (If you are not familiar with Home Power, check it out.  It’s great magazine on renewable energy, though a lot of the juicy electronics type stuff is in the back issues.)

The circuit I mentioned runs at around 5 KHz (I recall; I don’t have the specs in front of me).  Now, think of another 555 timer circuit, this one with a much smaller frequency, maybe a few Hz.  In other words, imagine an LED blinking noticeably.  Now, think of a nother one, but with a slightly higher or lower frequency.

My circuit uses the two 555 timer circuits I just mentioned, as well as the dimmer circuit.  Basically, the two circuits flashing at a few Hz switch resistors on and off on the dimmer circuit, causing the brightness of the bulb to change.  With both circuits going at once, there are a few different levels of brightness the bulb can be at.  Technically the patter is not random, but it does look that way to the casual passerby.  I believe the term for this is pseudorandomness.

Right now I have this working for a 12 volt DC bulb.  For something like a 60 watt 120 V bulb on AC, search around.  There are some other ciruits I found in the quest for finding a nice one for a low voltage bulb.  The MOSFET I used can tolerate I think around 20 amps, though I only use it with a bulb that pulls about 200 milliamps.  If you want to use a bigger bulb a heatsink would be a good idea.

I’ll try to get a schematic up soon.  Until then, maybe someone can come up with a similar circuit.