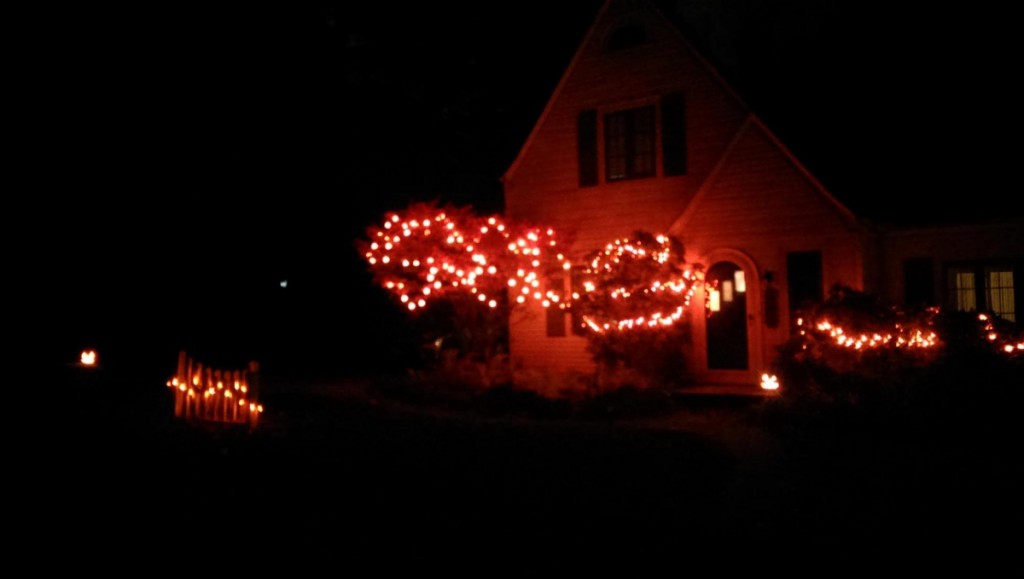 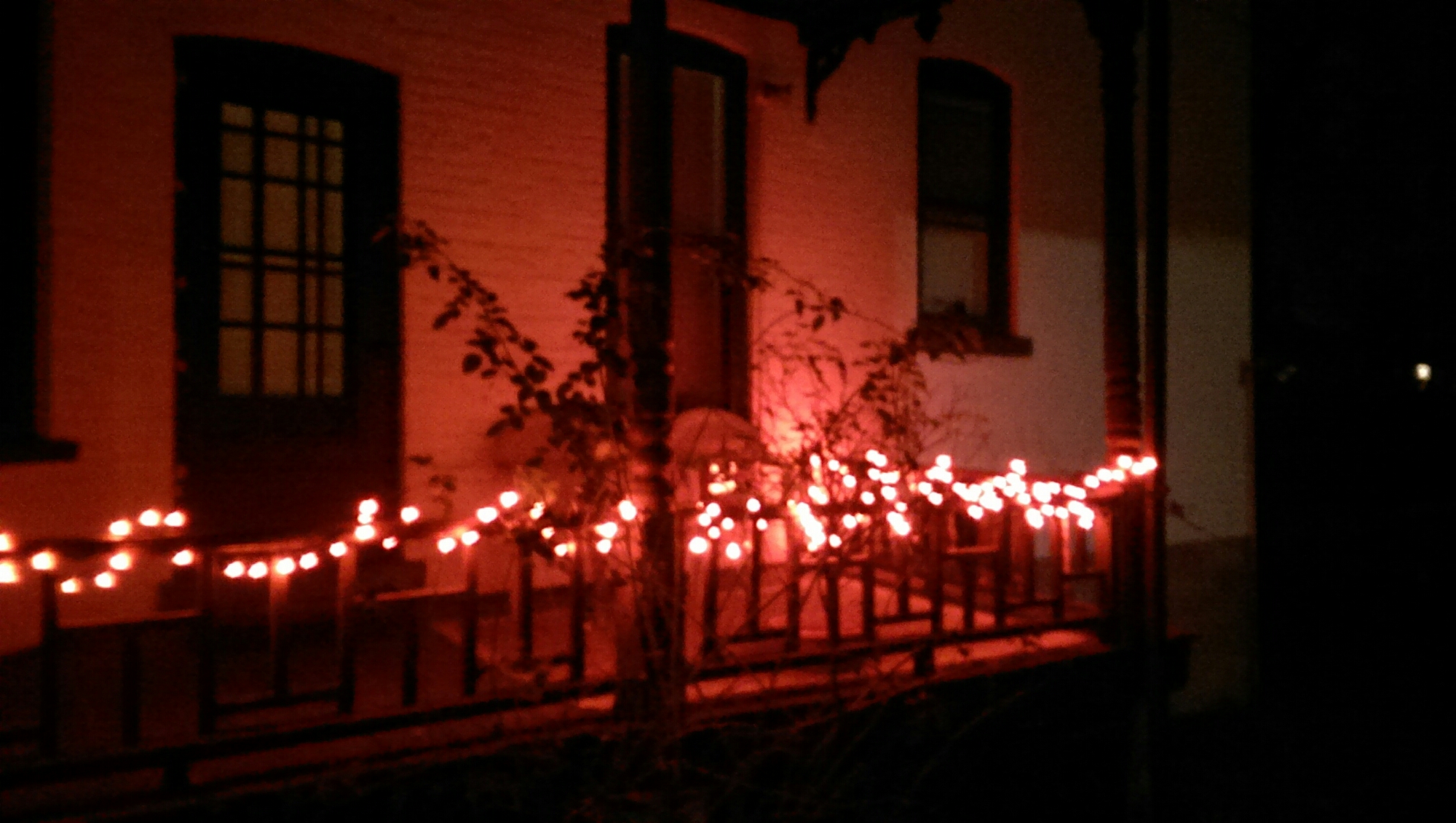 I have been having a great holiday.  I did a little traveling this week, and am about to get ready for New Year’s.  However, during this time a subject has come up which I think deserves a post.  This, is a hack: 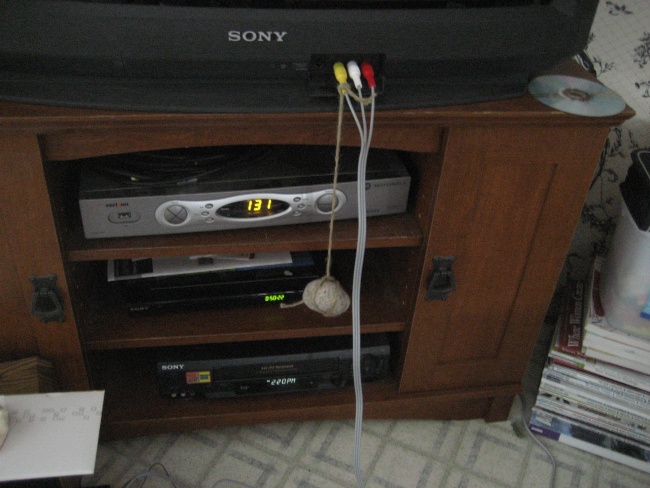 You see, the jacks on the front of the TV don’t work too well; the video one in particular needs to be pushed down for the connection to be made.  We had tried jamming a wad of packing peanuts in there, which worked for a while, but not for long.  What you see here has been working fine for several days now.

However, it is by no means an elegant solution.  A better one would maybe involve gluing the connector down.  Or even better, resoldering it.  But both of these are a little more than we want to put up with right now, it being the holidays and all.  This works well, the stone hasn’t fallen out, and we haven’t had problems with the connectors.

When solving a problem it is nice to pick a solution that is simple, practical, lasts, and most importantly, actually solves the problem.  The first three of these are debatable in this case, but the latter does not apply.  And in the end, addressing this part is what you want to shoot for.  However, when it comes to quick, temporary fixes, exploration, and plain-old fun, a hack can be key.  Remember to be aware of what you have available to you, as far as tools, resources, and skill, and try to make the best of it.

Hmm, haven’t posted here in a while. Well, nothing too noteworthy’s happened, I suppose. I’m taking a class, and working in between class days for some cash. It’s been going well for the most part, thought I do want to be done.

Well, it was kind of warm today.  I’m not one to blame climate change, as this is a normal January thaw (so it would seem to me).  But it’s a lot like spring outside, and that’s something.  I mean, it’s certainly T-shirt weather, and almost shorts weather (depending on your definition of shorts weather).  Not a lot of snow is left, and it was raining last night.

This is weird, and short-lived, of course.  I mean, next week we could just as easily have a foot of snow here in the swamp.  But I will say it’s kind of enlightening.  I don’t like the overcast days but I do like feeling like spring is close.  In the midst of worrying about school and work and all that other stuff, I can now say The Future Looks Bright.

And that brings me to my next point.  While not one to pick favorites as far as the subject of music goes, if pushed I would say that Steely Dan is probably one of my favorite bands (or duos, or however you want to describe their operation).  By extension, I do enjoy Donald Fagen’s solo works as well (his earlier two in particular).  Recently I was listening to the song IGY from his album The Nightfly, and was reminded of the sophisticated lyrics of this piece.  The theme behind the album centers around the perspective of a teenager in the 1950’s, dealing with the fears and dreams of people at the time, including optimistic visions of the future.  Getting back to IGY, take a look at this lyric:

I love this quote because it shows the optimism people had as technology progressed.  I mean, I guess nowadays we have computers that “make big decisions,” but then the idea of a big thing that did calculations was quite different.  It should be obvious, but as I sit at my laptop, which makes any room-sized computer from back then look like the crappy little calculator on a clipboard I can’t help but find it fascinating.  And to boot, it’s an ironic warning against Skynet!  (If it was a warning against Windows, Mr. Fagen has failed.)

Of course there are other references in the song too, like to Spandex and an underwater, transatlantic railroad.  I have to wonder how different the future will be than what my generation perceives…

I am presently in Quakertown, PA with Jack Swift. It’s been a week since we officially kicked this thing off, though we’ve only really been on the road since Sunday. So far it’s gone pretty well. We haven’t had to sleep in the car yet, and all the places we’ve played at have been great.

Well, we did have one kind of shitty experience, but it was still fun. It was too loud on stage for our tastes, and hardly anyone showed up, but other than that it was a good experience when all was said and done.

Well, we are on the road. So far so good, though we’ve really only had one show. This is a nice break, great way to not think about school for a little while.

Anyway, here is a Fishing Cat: 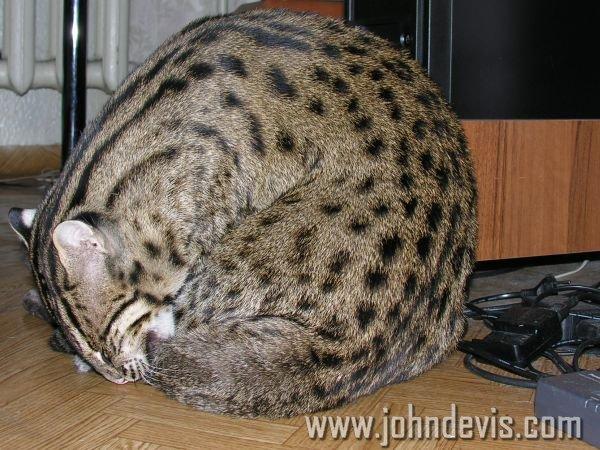 I am in a band, the Jack Swift Band (or simply Jack Swift).  We plan to tour throughout the month of June, and so we decided to set up a blog.  As of this posting there’s not much activity – I’m actually the only one to post anything so far.  But check back; all band members will be writing there, and lots of pictures, videos, and audio will end up there.

The tour kicks off on the 28th – check the site for details.  It’ll be a bit of a new experience for me.  I mean, while I’ve basically lived away from home for the past year straight (more or less, with time home for vacation, holidays, etc), I haven’t really been that far away, and my living conditions have been relatively constant.  Now, we’ve all conceded to the possibility that we’ll end up spending a night or two in the cars exists, and other than that we’ll be crashing at various people’s homes.  Almost all of the tour will be in areas I am hardly familiar with (except the Buffalo and Rochester portions, as I live in these areas).  So this will be different.  I’m a little scared, but very excited.  It’ll be a great opportunity for me to see a change of surroundings, and spend a lot more time playing bass (obviously).  So look at jackswiftband.com, and if we’re in your area, check us out.

Well, I mentioned before that my trusty old Toshiba laptop finally kicked it.  Well, I am now on a shiny new Lenovo G530 laptop, and so far it’s going good!  I’m running Ubuntu 9.04, and am impressed with how well things seem to be supported on it.  So far I’m pretty happy.

I wanted to get a refund for the Windows Vista Home license I’m obviously not using, but Lenovo was giving me the run around about not being able to do that when it’s bundled in with the machine.  I’m still going to try, though, so we’ll see what happens.  Anyway, now for some pics, mouseover for comments: 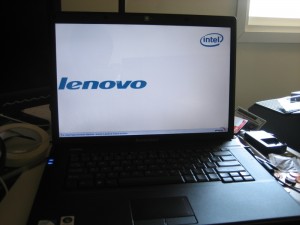 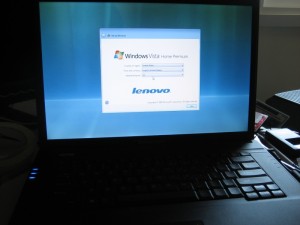 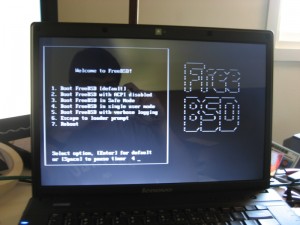 I didn’t, of course, accept the Windows license.  I probably won’t get anything for it, but whatever.  For fun I threw a FreeBSD CD in, but decided not to do the install.  Ubuntu is running happily, and that’a s good thing.

Well, it’s been a while since I wrote anything.  A lot’s been on my mind with school and some Jack Swift things, but the end (of the quarter at least) is pretty much here.  I just have a couple exams, and then I’m free for about a week.  Wish me luck!

On another note, my laptop died a couple weeks ago.  It was an old Toshiba one (relatively), and it held out nicely for the five or six years I had it.  I’m not sure what made it croak; it started crashing mysteriously at one point, and then it just wouldn’t boot.  Luckilly the hard drive seems to be alright, and at any rate I’d pulled my data off it.  So I didn’t loose too much.

I’m getting a lower-end Lenovo to replace it.  It’s not the zippiest machine, but I don’t need that – just something to throw Ubuntu on, and use for Web browsing and working in the coffee shop, checking my Email, posting here, watching the occasional movie on car rides, etc.  I may do some heavier things from time to time, like edit video, but that’s what the desktop is for.

I should get it next week, and I can’t wait.  I’ll post more when that comes.  In the meantime, I’m off to the pool, because it’s too hot.