Here are some random water pics:

It is certainly nice to be here now.

The last month or so has gone alright.  Here are some random pictures of cats and colorful lights.

So last week Richard Stallman came to RIT to speak.  I went, and got some pics:

(Edit: Click the thumbnails for full, non-horrendously cropped versions of the pics.)

It was an interesting experience, I even got to shake his hand.

He spent a bit of time railing on Microsoft and Apple, and on Amazon too a little.  For those not familiar, RMS is quite the campaigner for freedom – check out his Wikipedia page for more of his accomplishments.  If he’s coming by your town I would say it’s worth going to hear his talk, very eye-opening.  I’m not quite ready to rip all the proprietary software off of my computers (though I do run Ubuntu for the most part, and most of what I do can be done of free software), but the points he has are very good.  Maybe someday all software will be free software.

It’s been a while, so maybe I should fill in a little.  The weather’s been pretty nice, a bit cooler (though today was actually warm), but very nice for the fall.  Halloween was good.  Both Endicott and Buffalo are looking nice this time of year.  Here are a few pics:

So there you have it.  Not much has been going on on the Jack Swift front, but we’ve got one more song we’re going to stick on our album sometime in the coming weeks.  I’m still playing on my own of course, and have been working here and there on a tapped arrangement of A. C. Jobim’s Wave.  It should be interesting, maybe I’ll post it here.

I’ve still got  couple more projects, or at least aspirations of projects.  My sine wave inverter idea is looking good (in my head), so it will probably get some mention at some point.  (In the mean time, think class D amplifier powered by 200 VDC and putting out a 60 Hz sine wave.  There are actually similar designs people have out on the net.)  I’m also planning on turning my Soekris Net4501 single board computer into a data logger/some sort of remote controller/whatever, the first step to which involves sticking Debian on it, which I’m actually doing right now.  Or trying to do.  It’s been giving me trouble, but I think I might be able to make it work.  I may actually post again about it tonight.

But anyway, hope your fall is going well.

So it is now fall.  The summer finished up nicely, we even got to go to Cape Cod.  (Photos will follow.)  I’m still working, with the intent of returning for classes in winter quarter.  Still playing music, still messing with Linux, still dreaming of getting all my power from the sun (or at least right now for my mail server), and above all playing with the cats when I can in Buffalo.  But first, some selected Cape pics:

So that’s been the highlight of the past month or so.  Work still drags on, this blog still collects spam, etc.

Finally, it’s getting colder out at night.  A month ago I needed to have the AC on in order to sleep – it’s much easier for me to when it’s colder out.  Now it’s comfortable, and not too humid.

I guess I might as well throw out a few random things here.  First of all, for his entry in the Buffalo 48 Hour Film Project this year, my brother has won the award for best use of prop.  The prop is a head of cabbage, and the genre is mockumentary.  (Check out their site for details.)  Four of the six currently active members of Jack Swift (myself included) recorded a five-song sound track on Saturday the 15th of August for the film (which was due the 16th).  Here is the film, titled Cabbage in Common:

It was quite a time.  They may have one in your area, check it out.

Here is an interesting picture I took a little while ago, but never uploaded.  It’s the moon in Endicott, NY.  I was having trouble sleeping, so I grabbed the camera: 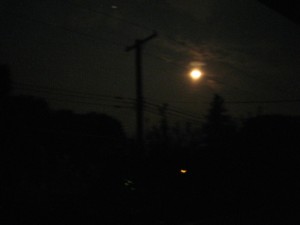 So let’s see, what else…  Well, last fall I talked about my light flicker circuit, and how I would put up something resembling a schematic.  And then I never did.  Well I’ve been thinking about it again, and now I will try to get something going.  It’s a little convoluted, but it’s not a terribly complex thing and I think people would get a kick out of it.  I would also like to make a PCB layout for it too, and clean it up.  But schematic first.

Well, that’s it for now.  It’s the last day of August (right now there are 15 minutes left), and while we’ve still got a few weeks of summer left fall is on the horizon.  So until next time, whenever that is, have fun.

It’s been a few weeks since I posted, and a lot has happened.  I started working, and recently had to go until 2:30 am…  Saturday morning.  And then after seven hours of sleep, into the evening as well.  But that happens.  More importantly, the week between when I started working and when I got off tour with Jack Swift I attended the Jamey Aebersold Summer Jazz Workshop.  There are two weeks (two different sessions), and during that time you get to play in a small ensemble of people who are about at your own skill level, attend master classes for you instrument, and hear some great – that is to say, amazing – Jazz every night.  And during lunch.  (The food was pretty good too.  Not great, but pretty good.)

It was an incredible experience, and if you are a Jazz musician you owe it to yourself to go.  They accept people of all skill levels and ages, so you can be sure there will be people who are not miles ahead of you, along with more experienced people you can learn from.  I would highly recommend it.

I have here some pictures I took.  I am not a photographer, and unfortunately happen to be horrible with names, so I do not remember some (okay, maybe half) of the subjects of the given pictures.  If you were there and are willing to name someone I missed, feel free to drop me a line.  You can do so either by leaving a comment or, if you’d prefer, by mailing me at ben <at> whatsmykarma <dot> com, adding the period and @ accordingly.  (If you appear in a photo and do not want to, let me know, but it would probably be better to Email me.)

In the past we’ve had a decent amount of snow around Christmas time.  Well, we did have some this Christmas.  It was pretty nice, not too much.  But now maybe four days after a lot of it has melted.  In fact it was actually in the 60s this weekend here in Buffalo.  It was in Endicott, too.  In a way it’s kind of nice, makes it like spring.  But snow is nice too.

I have some pics of course.  A cat picture is in there too.

Christmas was fun, and I’m looking forward to a good New Year’s too.  Hope everyone’s holidays are going well!

Well, I spent the last week around Binghamton working.  Before that I learned that I did much better than I thought I would in some of my classes.  So I am relieved.  It’s late, and I don’t feel like writing more now.  Here are some cat pictures:

This weekend I once again found myself in New York City, though this time I went with some people from school.  We went to see the Mel Brooks musical Young Frankenstein, which turned out to be amazing.  We also walked around the city for a little while before and after the show.  As you might imagine, I have some pictures:

It rained a lot there, which kind of made the busride back miserable as I was soaked while trying to sleep for the seven hour trip.  But whatever.

New York City is a great city.  I like going there, whether for a play or for Jazz.  But truthfully, I’m not sure I’d want to live there.  It’s just not my thing, I’m not a city guy.  Maybe I could live in downtown Buffalo, as it’s not quite as big, but I’m still not sure that would be my pic.  Well, that’s just me.