A while back I posted about a circuit I had devised that would make a lightbulb flicker such that the light it cast would resemble a candle flame. You see, last Halloween I was living in my apartment on RIT, where fire is not permitted. So I began to comb around a look for a circuit online that would make a normal light bulb flicker in this way. There are some floating around, but after a while I decided I wanted to build my own. I did, and it works pretty well. I was going to post a schematic, but it was something I kind of put together on a breadboard, and didn’t have a diagram handy. I was going to make one and post it, but I forgot about it. For a while. Well, now I do indeed have a schematic, having just thrown one together. I am posting it here, and you may use it for personal or educational, non-commercial use. Here it is: 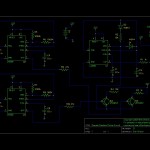 The circuit is meant to run on 12 volts; if you’ve checked out some other posts you’ll find I’m a bit of a solar power nut.   I figured low voltage is relatively safe for this sort of thing, and I had 12 volts handy anyway from a gel cell, so it works out.  (A wall cube supply would also be great.)  The light also must be 12 volts; I’m just using a small 1/4 amp bayonette bulb I found at an electronics store (it works well in a Jack ‘O Lantern).  The bulb is driven by MOSFET Q1, an IRF720.  It can handle a lot more, probably a couple amps, but you’ll need a heatsink for it.  The bulb I use doesn’t make it heat up all that much. Basically this circuit is kind of like a light dimmer.  You’ll notice it uses three 555 timers, that tried-and-true timer IC that’s been around since forever (the 1970s).  These have lots of pages associated with them scattered around the Internet, so check Google for the fine details.  But basically timer U1 is a PWM light dimmer – we use it to turn Q1 on and off really, really, fast (around 1 kHz), and we change the duty cycle (the percentage of the time it’s on) according to how bright or dim we want the light.

To control the dimmer, we use two other 555 timer driver circuits.  These control it via Q2 and Q3, which add resistance and thus change the brightness.  Q2 and Q3 are controlled by U2 and U3, which turn them on and off.  By doing this at much slower rates (they must not be exactly the same, but close), different levels of brightness are acheived.  Because the rates are different the light cycles through the pattern.  It’s not truely random, but it looks close enough to the casual observer, making it pseudorandom.

Now, you could play with R5, R6, R7, and R8 to get different rates, and maybe make it a little more realistic.  You could even stick potentiometers in there if you wanted to adjust it.  But you’ll probably be fine with just experimenting with different values until you find something you like.  (Again, I won’t go into it too much, as plenty of info is available on the Web.  Also, it’s late, I’m tired, and I don’t feel like thinking about it too hard.)  I suppose you could also build upon this concept and use it to drive something like a thyristor and control an AC bulb.  (Be careful when working with high voltages; you do it at your own risk.)  If the one bulb’s not bright enough, you could also add more in parallel.  They would all flash the same, so it would work.  You could add more dimmers and more driver circuits for different combinations, if you wanted to drive a bunch of pumpkins and not have them all mysteriously flicker in unison.

Or, you could just use a real candle.